The history of Turnov is as rich as the Bohemian Paradise itself. It was founded in the first half of the 13th century and is connected with the important aristocratic family of Markvartice. Turnov was closely connected with crafts and trade right away since its establishment, which was also due to the fact that there was an important trade route going through the city. The city was prospering and in the 15th and 16th century acquired important legal and economic privileges. Turnov is known especially for its gemstone tradition and jewellery production. It and mainly the interest of this line of work was so high, that there was in 1884 established Technical School for processing metals and gemstones. Nowadays is the school called The Secondary School of Applied Arts and the College of Craft and the traditional branches have been completed by flat and plastic engraving, artistic metal casting an in the recent years very popular artistic smithy. The school was in 2001 extended by tertiary technical school. Every year when the school year ends is possible to visit the school and see the presentation of current final exam works.

The history of the city, tradition of the craft and geological foundations of this region are synoptically and interestingly presented at the Museum of the Bohemian Paradise, which regularly organises workshops for children, educational programmes for the public and also very popular Old Bohemian market with wide choice of cultural and educational events.

Part of the museum is The Gem’s Cutters House. It is a copy of a timber town house, which originally stood on the corner of Havlíček’s square and 28. Října Street. The building nowadays functions as a “living” house with demonstration of traditional crafts. What is worth visiting is also the Synagogue, which was saved from destruction and oblivion under the wire. In Sobotecká Street, opposite the entrance to the well-known Mašek’s Gardens is located the old Jewish cemetery, which was, however, severely scarred by construction of the road bridge.

The city is also famous for production of the garnet jewellery. Granát Turnov has been since 1953 producing first quality jewellery. Original jewels with modern or traditional design are very popular not only in the Czech Republic but also worldwide.

You can find here: 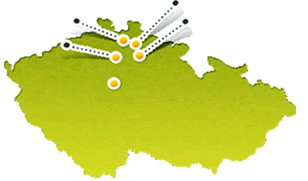